Acts of kindness and the life lessons they teach us can appear in the most unlikely of places.

I was recently flying from Atlanta to Phoenix and became friendly with my seatmate Don Laney, a former Special Forces soldier who was now a successful businessman living in Georgia. We had a wonderful discussion about the military, business, and success.

At the end of the flight, I watched as he handed the Delta flight attendant a crisp $100 bill as a tip for her amazing service. She broke down in tears as she explained how she was going through some tough times and had been unable to work for a month because of some personal challenges. As a result, she wasn’t going to be able to buy the bicycle that she had promised her daughter for her birthday (pictured on her iPhone). And now she could! 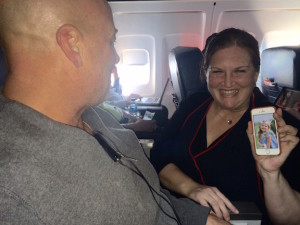 Her tears of gratitude were heartfelt, and I couldn’t help but think about how that gift would impact this woman’s life. Not only would her family benefit, but also her friends, co-workers and even the future passengers she would serve. I walked off the plane feeling great, and I have a feeling the others who witnessed what happened did as well.

I told Don I had never seen anyone give a tip like that, especially on a plane ride. He said it was she who gave him the gift – and it was worth a lot more than $100. Not only did he feel good about giving, but he knew its positive impact would ripple throughout this person’s life in ways we would never see. He said “you can’t put a price tag on that.”

How true that is!

All these things say: You Matter…You are Appreciated…You Make a Difference!

Smiles are contagious. And so is the positive energy that results when you acknowledge someone for being special. It’s about honoring one’s humanity (which in my opinion is a great way to serve someone.) You never know how your kind word, extra tip or gift will affect someone. Perhaps it will lift their depression, inspire them to take action on an important decision, work harder, or appreciate others more. It leaves a ripple on the ocean of life.

Don Laney was my inspirational coach that day. He was a wingman not only to the flight attendant, but to me as well. He reminded me about unconditional service, generosity and kindness. He left a mark.

I hope you too will serve someone today in some special way.