Lessons From an NFL Legend 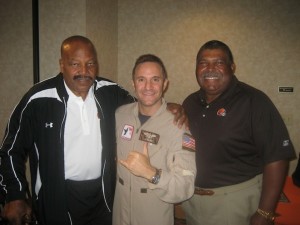 As we approach The Super Bowl this weekend, I thought I would share a short story about an experience I had with the NFL a few years ago.

I had the rare opportunity to speak to The Cleveland Browns in 2008 the evening before they played The New York Giants on Monday Night Football. It was one of the most rewarding (and, quite honestly, intimidating) speeches I ever gave.

The Browns were having a poor season. At 2-3, they were a far cry from living up to their solid 10-6 record the year before. The Giants were the reigning Super Bowl champs and were red hot with a 4-0 record. They had racked up an 11-game winning streak on the road–the second highest in NFL history! This would be no easy match up and as you can imagine, the tension in the room was high. I spoke about commitment, courage, and winning as a team. It was intense and fun.

After the program, an older gentleman in his late 60’s approached me from the back of the room. He was ~250 pounds, 6’2, and walked with a cane. “Hello Waldo, my name is Jim Brown,” he said as he shook my hand. It felt like a vice. I knew who he was, but didn’t expect him to be in the room during my program. A legendary running back, he was named by Sporting News as the greatest professional football player ever and is considered to be one of the greatest professional athletes the U.S. has ever produced. I instantly was mesmerized.

He spoke quietly and stared into my eyes. He didn’t blink. This man was serious. My hand got numb. “Waldo,” he said, “They may have been smarter than me, but they never worked harder than me.”

We have a saying in the military – “The more you sweat in peace, the less you bleed in battle.” What an awesome philosophy to have in business. Jim brown lived that philosophy and his record and reputation showed it.

In business, you’re going to go up against some awesome competitors. They’ll have a better reputation, a more recognizable brand, and a larger marketing budget. They’ll be smarter and faster and stronger. But you can still beat them IF you outwork them.

There are no short cuts for success. No secret formulas for building your income. Beware the new age business philosophers and “experts” who promise more success with minimum effort. It’s bologna.

The greatest asset you have that can lead to victory is your work ethic. It can’t be commoditized or outsourced. You have to own it.

Do what your competition isn’t willing to do. Put in the extra effort. Hit the office earlier. Network consistently. Leverage technology and social media. Give and earn referrals. Stay fit. Read the books, attend the seminars, and sharpen your sword.

Your competitors will hate you for it, but your customers will love you.

P.S. The Browns crushed The Giants!