Be a Commander, Not a Demander

Have you ever worked for a leader or peer who was great at barking orders, but did little to emulate the characteristics of a real leader? I bet you didn’t feel motivated to put in a lot of effort for that person. You probably didn’t respect them either.

In the military, most leaders are referred to as commanders (i.e. Squadron Commander, Battalion Commander, Wing Commander, etc.)   These leaders aren’t demanders.  They lead through example.  If not, they don’t lead very long. 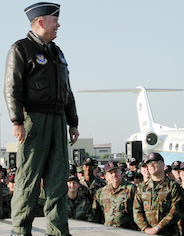 Sure, in the military there is a chain of command and rank often has a lot of influence on the behavior of subordinates.

But all things being equal, leaders command the best out of their people and get them to put in the extra effort during tough times.

Leadership in any endeavor is about influence. And influence is about trust.

So the questions to ask yourself when leading others are: Do my people trust me when I give them “an order?” Will they give 100% or be complacent?